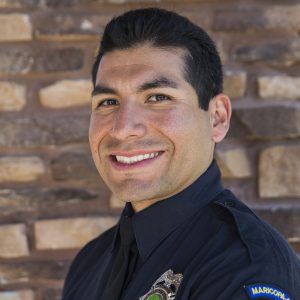 
Facing down fire is nothing new for Aaron Fajardo, a Firefighter/EMT with more than a decade of experience. But facing down gunfire is, quite fortunately, a rarer occasion.

Last July, Aaron was part of a three-man engine crew dispatched to a collision involving two vehicles. Within minutes of the engine’s arrival on scene, one of the motorists involved in the crash began firing a gun in the direction of Firefighters, EMTs, and other emergency responders. Aaron instinctively shielded the patient he was caring for with his own body. He secured cover for himself and removed the patient from the direct line of fire. More than two dozen law enforcement officers arrived on the scene and apprehended the gunman.

Aaron’s compassion toward others and his enthusiasm for the job are palpable. He is motivated to learn, grow, and earn more responsibility. Though Aaron only joined the Rural Metro Fire Department four years ago, he has not hesitated to take the steps needed to advance his career and secure a bright future.