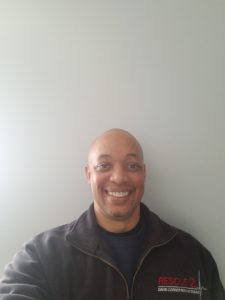 
Tony started his career in EMS in Virginia Beach, where he worked from 2004 to 2017. He earned his EMT certification there and became a life member of Davis Corner Volunteer Rescue Squad. In 2006 he applied to Medical Transport, and he was assigned to the Suffolk office.

While he was working with Virginia Beach EMS, Tony became a member of the SAR/Bike Team, and he was promoted to sergeant. In 2014, he became assistant captain at Davis Corner, and in 2015, he was promoted to captain of the Rescue Squad.

Tony was named Employee of the Year for 2017 in recognition of his extraordinary care, passion, bravery, heroism, and genuine selflessness while rescuing a disabled resident from a house fire.

While on shift for Medical Transport, Tony and his partner were right down the street from a residential fire, so they went to help, even though they were not assigned the call. They arrived before the firefighters and police officers, and sprang into action. Tony ran in and found a patient in the kitchen then attempted to put out the grease fire. He helped the patient from the house, battling the thick smoke. When the fire reignited, Tony ran back in to save the home.

Tony is currently assigned to the Southampton County 911 (Courtland Office), and he is a member of the Metropolitan Medical Strike Team (MMST). He also works part-time for the City of Chesapeake Fire Department, giving back to the community.

Everyone at Medical Transport recognizes Tony as a standout employee and a great example of how to act. He shows constant professionalism day after day. His contributions to various organizations as well as Medical Transport go above and beyond the call of duty.