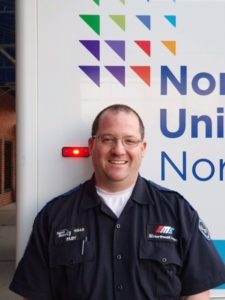 
Brian began his EMS career as a volunteer EMT in 1998 in Patchogue, New York. After a career in retail management, he decided he needed to do something more fulfilling and made a career change to EMS.

In 2011 Brian joined Northwell Health, and he obtained his Paramedic certification in 2013. He enjoys the daily challenges of paramedicine and the opportunities to help those in need.

Brian is always looking for new challenges to take on, and he took his commitment to serve a big step further when he deployed to Florida with the department FEMA response team to assist in Hurricane Irma relief efforts in 2017.

Back home, Brian recently became a part of the Northwell Health Center for EMS Community Paramedic program, and he is currently studying for his CCEMT-P certification.

Brian is nominated as a Star of Life in recognition of his dedication to his profession and the empathy he shows both to his patients and to his coworkers.

He is the proud father of three children, eight-year-old twins Abigail and Jack, and four-year-old Madison.