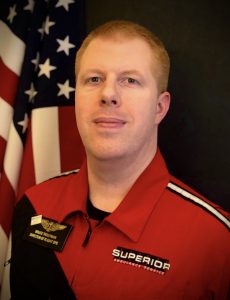 
Bruce Troutman has played an active role in EMS for the last eighteen years. He began his career at Superior Air-Ground Ambulance Service, Inc. in 2002 as an EMT, while simultaneously studying psychology at Loyola University Chicago. He quickly developed a passion for the ambulance service industry and prehospital care. He obtained his Paramedic license in 2004 and then advanced to his first leadership role as a Station Manager after college. By 2006, he had completed training to become a Critical Care Paramedic and transitioned to the Critical Care Transport Team.

While serving on the Critical Care Team, Bruce discovered that transporting critically ill patients was his passion. He quickly became one of the team’s leading clinicians and educators. Demonstrating effective leadership in operations, a passion for advanced education, and a desire to raise the standards for patient care, Bruce worked in multiple leadership roles including CCT Assistant Manager, Clinical Coordinator, and Clinical Manager. Bruce’s primary focus has always been to ensure that critical care providers deliver high quality care to their patients. In his clinical leadership roles, he developed new orientation, continuing education, and Critical Care Paramedic curriculums. He also formalized the division’s quality processes into a multi-disciplinary quality management program to include collaboration with hospital stakeholders.

Throughout his career, Bruce has frequently sought opportunities to make himself a better provider, educator, and leader. He maintains instructor certifications in ACLS, PALS, and PHTLS. He also obtained certifications in Pediatric and Neonatal Critical Care, EMS Education, and as a Medical Transport Executive; and, in 2013, he cross-trained in flight operations. After becoming a Flight Medic, Bruce served a term on the Board of the International Association of Flight and Critical Care Paramedics. Bruce returned to school in 2016, and obtained a Bachelor of Science in Nursing from Olivet Nazarene University and his RN license.

In 2018, Bruce was promoted to Director of Flight Operations and Assistant Director for the Critical Care Division. His clinical expertise and experience, along with his exacting standards, strategic mindset, commitment to excellence, and unmatched work ethic have proven invaluable to the Critical Care and Flight programs. Under his leadership, the Critical Care and Flight Team’s scope of practice has increased; ground and air teams have further integrated; new protocols, policies, and procedures have been developed; and services have expanded. Bruce’s hard work paid off when he led his flight division to achieve CAMTS accreditation in November 2019.

Despite his full-time leadership roles, Bruce loves clinical practice and ensures he is always scheduled on an ambulance or helicopter a few times a month. In his personal time, Bruce lives a quiet life forty miles southwest of Chicago and enjoys spending quality time with his family, especially his niece and nephews.