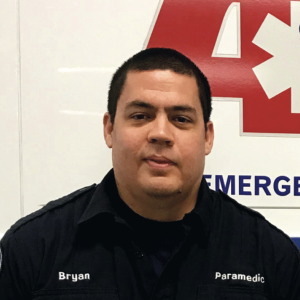 
Bryan McKeon is being honored as a Star of Life for his actions while off duty that resulted in saving a cardiac arrest victim’s life. He was at his local gym when a patient in their 70s collapsed. It was a lucky day for that patient as Bryan and an off-duty San Jose Fire Department medic were close at hand. Together, they began CPR and delivered a shock from an on-site AED. By the time first responders arrived the patient had a strong pulse and was regaining consciousness. Bryan stayed with the patient and continued to assist until transport. The patient was discharged two days later. This singular save is indicative of Bryan’s commitment and professionalism that have also served him as he has dealt with crises such as the death of a co-worker, the local paramedic shortage, and the rising opioid epidemic.

Bryan began his tenure with AMR in 2015. He continues to challenge himself, becoming an Alternate Supervisor, Field Training Officer, and Preceptor to paramedic candidates. He is active in the community assisting with CPR and Stop the Bleed training programs and with the EMT program at the local college.