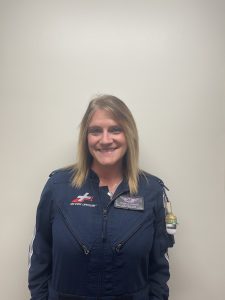 Bryanna Johnson is being honored for her role in extinguishing a fire in an aircraft, pre-flight. Although she suffered burns to her hands, Bryanna’s heroic act helped save both a patient and a Paramedic. The incident happened as the aircraft was preparing to lift from a hospital. Bryanna realized that her partner’s flight suit had caught fire and acted quickly. She pulled her partner from the aircraft, while also protecting the pilot and patient onboard, triaged the situation, and rendered care to her crew member. Bryanna then requested additional ground and air resources for the scene and collaborated with the pilot and hospital staff to ensure everyone was cared for promptly. Her professionalism and focus during this unexpected and chaotic event are hailed as the reason the situation ended well.

Those who know her well say they are not surprised by Bryanna’s cool and collected demeanor in an emergency situation. Her dedication and commitment to the field of air medicine has allowed her to care for more than 750 patients.