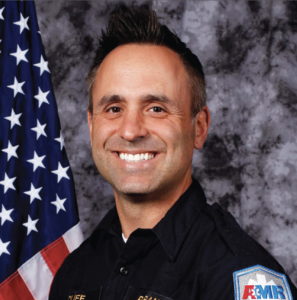 
Clifford (Cliff) Jacks is being honored as a Star of Life for his determined actions in saving a 12-year-old who had collapsed during P.E. class at a local school. Cliff and his partner responded to the call and found the child unresponsive. Thinking quickly, he was able to convert the refractory V-Fib, achieving return of spontaneous circulation after three defibrillations. Cliff made the decision to immediately transport the patient to the nearest emergency department to stabilize. But he knew he would need to be on hand to then take the patient and the critical care team to the local Children’s Hospital. This forward-thinking ensured that the patient got the correct level of care and contributed to the patient having a positive outcome. Cliff’s commitment to always providing the highest quality of care to his patients was truly on display that day.

Cliff has been in EMS for 20 years and has been a medic for almost 15. He has continued his education, earning a BS in Molecular Biology and serving as a Field Training Officer and a Paramedic Preceptor. He is widely respected as a leader and as someone who will go out of their way to help coworkers.