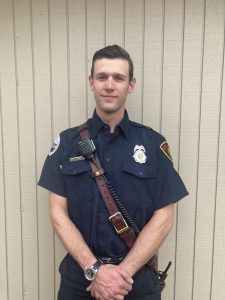 
Daniel MacDowell demonstrates a spirit of service for others and an impeccable work ethic. One specific situation where these distinguishing traits were clear was a call that involved a boy who had an allergic reaction to an insect bite. At first, everyone at the scene, including the boy’s family, thought the reaction was mild and did not require an emergency response. However, as Daniel, who was among the first to arrive at the scene, was putting the boy in his family’s car, he noticed that the boy had fainted and his face was starting to swell. Recognizing that anaphylaxis was imminent, Daniel showed courage, medical judgment, and leadership beyond what can be expected from a new EMT, and stopped the family from going to the hospital. He then measured and administered the correct dose of epinephrine per protocol, reversing the symptoms and saving the child’s life.

Once the ambulance arrived on the scene, the boy was found safe and in stable condition. His family members stood by, smiling as tears ran down their faces, forever grateful that the boy was still alive—all thanks to Daniel.