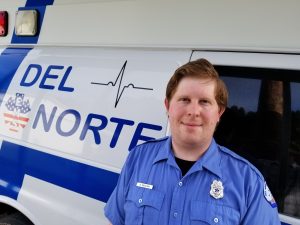 
Devin Degler has climbed the emergency medical services ladder one rung at a time.

Del Norte Ambulance’s Star of Life started his EMS journey back in his childhood with the Boy Scouts of America, which led him to becoming part of the Explorer Program.

In his hometown of Crescent City, CA, Devin had a number of career choices, including Explorer posts with the local fire departments, law enforcement, the Sea Cadets, and Del Norte Ambulance. The question was, which one?

Something inside drew him to the EMS field, and soon, the quiet son of a former U.S. Navy sailor was learning about CPR and pressure bandages, instead of tying knots and raising mainsails.

Upon graduation from Del Norte High School, Devin was encouraged to take the locally offered EMT-Basic class. In the meantime, he became a driver for Del Norte Ambulance. Once he finished the course and passed his National Registry test, he was hired full-time as an EMT-B on the ambulance.

After several years of enjoying EMS, Devin decided it was time to move his career forward and enrolled in the Paramedic program offered by College of the Redwoods in Eureka, CA. With support from the company, and with help from his Del Norte Ambulance crewmates, Devin completed his studies and recently graduated with his National Registry as a Paramedic.