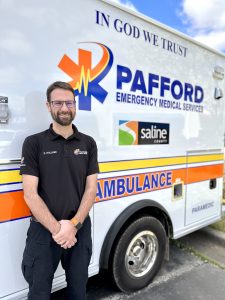 
Devin Holland, NREMT-P, serves as the Operations Manager for Pafford Medical Services’ Saline County, Arkansas operation. This is a seven-ambulance operation with a staff of more than seventy EMS professionals. As such, Holland oversees the day-to-day 911 operations and any special operations or event medical assignments.

He began his EMS career fourteen years ago as an EMT, achieved his Paramedic license in 2013, and has been working through the ranks from Paramedic to Operations Manager at Pafford over the past four years. Since his time with Pafford as Operations Manager, Devin has constantly put his team and his community first. His forward-thinking, optimistic attitude and his compassion for the job he does and the citizens he cares for is second to none. Devin has been instrumental and successful in inspiring those he leads to assemble and deploy sometimes at a moment’s notice to people in need.

Pafford’s top leadership, as well as the Arkansas Director of Operations, believe Devin has earned the American Ambulance Association Star of Life distinction because of his positive influence and his natural leadership qualities.

Devin says, “I honestly could not believe I had won the Star of Life award for Pafford. It is wonderful to know that we make such a positive impact for the patients we care for and the communities we serve. I feel so much appreciation knowing the things I have done with Pafford have not gone unnoticed.”

Devin is a dedicated family man who enjoys spending time attending sporting events or his kids’ school events. He lives with his wife, Elizabeth, and their two children, Liam and Madi.