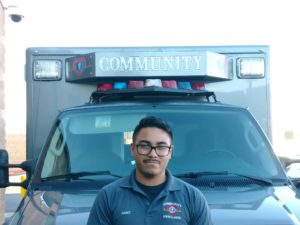 
Edgar was selected as Community Ambulance’s 2018 Star of Life because of his selfless service at the October 1st incident in Las Vegas.

Community Ambulance was the company contracted to provide medical services at the Route 91 Harvest Music Festival, and after the attack, Edgar and his partner, Julian Ness, were dispatched to get the injured to the hospital.

Edgar and Julian were one of the first units to arrive outside the venue’s main medical tent, and without hesitation, they began making room for as many patients as they could.

They returned to the incident two more times to transport additional patients.

Edgar has been part of the Southern Nevada community for 15 years and has served his community for over year and half. He chose to pursue EMS after realizing the impact that Paramedics made in his twin brother’s life, who lost his life to a brain tumor.

Undeniably, Edgar’s determination and bravery helped to save countless lives that night.