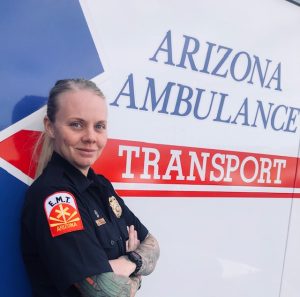 
Holly Griswold started her career in the EMS industry in May 2010. She accepted a position as a Para-transit driver with Arizona Ambulance Transport. During this role she attended the EMT program. After completion and successfully passing, she wasted no time in branching out into other areas of Arizona Ambulance to gain experience within the operation of the company. She took on the role of Event Organizer, facilitating both company and community events.

Within that first year, she proved her eagerness and dedication of her role and was offered another position as Field Training Officer. She quickly excelled in this role, proving to be one of the company’s top Field Training Officers. Holly’s ability to train new providers, both experienced and brand new, has been an integral part of our day-to-day operations. This level of performance and commitment earned Holly the Shining Star Award in early 2012.

In early 2014, Holly was the recipient of the Employee of the Year Award. Following this award, she was promoted to Operations Supervisor. In addition to her new supervisor role, she also accepted the role of Scheduling Coordinator. Holly accepting this role was proven to be very fitting and beneficial to Arizona Ambulance and its employees.

While she worked 24hr shifts on a ¾ schedule on the Critical Care Nurse Unit, she continued and continues to this day to make herself available to the employees 24/7-365. When an area hospital closed in 2015 without notice, Holly was able to reconfigure the schedule in a way that saved the jobs of all the employees who worked out of that area, with a deadline of fewer than 24 hours. She did this once again in 2017 when a major government contract we held was not put up for an RFP. In this event, she worked tirelessly to save the 16 jobs that would have otherwise been lost.

Holly continues to branch out and work in all areas that are available to her. During her 12 years, she worked a majority of those on the CCT unit and obtained certifications that her level of service would allow, amongst these areas she is also part of the Disaster Response Team and trains to maintain her red card for the Wildland Fire Team.

If you need something done or simply need help with a task, Holly is and always has been the “go-to” to get it done. She has earned and is unquestionably very deserving of the Star of Life award. Arizona Ambulance Transport is lucky to have her on our team.