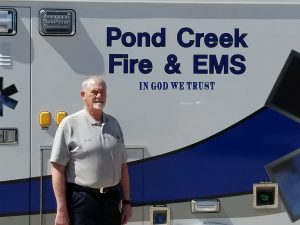 
Howard “Punky” Halcomb has been volunteering in emergency services for 47 years. He began his career as a Firefighter at the Pond Creek Fire Department in 1972. He served as Assistant Fire Chief for several years before serving as Chief from 1998 to 2006. He continues to have a major impact in the community as a Firefighter, Emergency Medical Responder, and Emergency Manager.

Punky’s leadership was crucial in establishing emergency medical services in Pond Creek and the surrounding areas. In 1974, Punky became one of the first registered EMTs in his area, and in 1975, at the request of the local funeral home, Punky and three other members of the fire department assumed the responsibility of providing transportation and care to the sick and injured using the funeral home hearse. By the late 1970s, Pond Creek Fire Department was able to purchase its first ambulance to provide emergency care. As the department grew, he continued to play a vital role in serving the community and still has a major impact today.

When not on fire or medical calls, Punky spends much of his free time at the station working on equipment or making much needed improvements. He still carries more responsibilities than most, including communications, storm spotting, tornado siren testing, and hydrant testing. He also volunteers his time at the school teaching the fire safety program.

Punky shares his passion for emergency medical services with his wife, Sara. She has served as a Firefighter and EMT for 24 years, and together they have helped countless people in their time of need, often working together on the same truck. Punky also handed his love for serving down to his son, Brandon. Brandon has made a career in emergency services as a full time Firefighter and Advanced EMT in Oklahoma. Punky has two other children, Mindy and Nicholas, both of whom have successful careers in other fields.

Pond Creek Fire and EMS is honored to recognize Punky Halcomb as a 2019 Star of Life Award nominee.