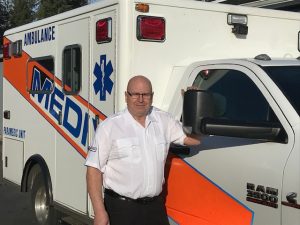 
Howard Mullins was born and raised in Warrenton, Oregon. He has been with Medix Ambulance since November 2013, beginning his career as a Wheelchair Van Driver. It soon became apparent that he had an additional high-level skill set when he jumped in as a mechanic for the Wheelchair and then for the Ambulance Divisions of Medix. Howard has the ability to quickly learn new things and has proven himself to be extremely valuable to the company.

Howard soon became responsible for helping put new wheelchair vans in service by performing the initial installations of the necessary equipment. He has become certified as a Ricon Lift service person, and is also the primary installer of the Stryker Power Gurney and Lifts systems for all of the Metro West family of companies. Howard is always available for any needs the company or its employees may have at any time. He is a great example to all fellow employees as someone who is willing to go the extra mile to accomplish his and the company’s goals, and he always leads by example.

When not keeping Metro West’s lifesaving equipment on the road, Howard also enjoys riding motorcycles and spending time with family and friends. He and his spouse, Nelda, enjoy living on the Oregon coast and in the relaxed atmosphere that comes naturally to the area.

Medix Ambulance is proud to announce Howard Mullins as our Star of Life!