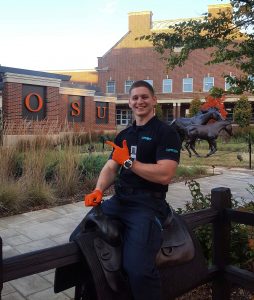 
When Hunter Poston graduated from Perkins-Tryon High School in 2013, he wanted to dedicate himself to something related to emergency medicine; it was not until college that he realized EMS would be his career.

Poston began working towards an associates degree in Health Services Technology at Northern Oklahoma College which resulted in him enrolling in an EMT class. Poston’s education and interaction with the community fostered his passion for EMS.

As a native of Stillwater, Oklahoma, Poston dreamed of securing a position at LifeNet EMS after he earned his EMT certification. The company, unfortunately, was not hiring at that time. Determined to fill his time with EMS work, he took a job offer with Life EMS in Enid, Oklahoma. After just three months of working there, Poston seized the opportunity to work full-time for LifeNet EMS in his hometown.

Although Poston was content with being an EMT Basic, he strove for greatness. With Poston being unable to start Paramedic school until 2018, he sought to work towards his Advanced EMT in the latter months of 2017. Following this, he started Paramedic school in 2018, and is set to graduate in July 2019.

Poston’s colleagues have proclaimed, “Hunter is extremely dedicated to caring for his community and puts his heart and soul into his work.” Additionally, they praise Poston’s dedication, saying, “He is in the process of completing Paramedic school while still working full-time to further provide the best care he can to those in need and is in the top of his class.”

Another colleague echoed those sentiments through nominating Poston: “Poston is always professional and clearly loves his profession… Hunter holds himself to very high standards and simply does not know how to do a bad job at anything. He has a great ‘bedside manner’ and takes his job very seriously.  Even the smallest complaint from a patient does not escape him. He studies nonstop working his way up to a higher medical license and he is always willing to help another employee. Recently, he dug through the garbage to help another EMT find her wallet. Poston always has a smile and has an amazing energy about him.”