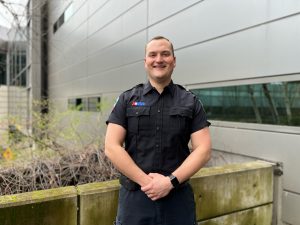 James Burn is being honored as a Star of Life for his compassion and bravery in two cases: one where his own life was at risk and another where others were in danger.

The first incident happened when James coaxed a man who was trying to kill himself back to safety. The man had doused himself with gasoline and anchored himself above a highway overpass before James persuaded him to receive help. And then, about two weeks later, he extricated an incapacitated individual from a vehicle that posed an immediate threat to others on a major freeway. In both cases, James deflected praise to others for the favorable outcomes of those incidents; however, it was James’s courage and actions in both instances that resulted in the positive end results.

James, who has been with AMR since January 2020, had previously served in a law enforcement capacity as a Washington State Trooper. He is a true servant-leader and demonstrates a commitment to his job and community, even when a situation puts his own life at risk. James never wants to take credit for all the good he has done, but would rather give the credit to his teammates. He is a role model and an example of integrity in the workplace.