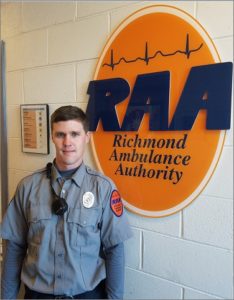 Scott grew up in Midlothian, Virginia, and graduated from Benedictine High School. He was not sure of his future until he witnessed a tractor trailer roll over and aided the person inside. He then understood what he wanted to do with his life.

Beginning as an EMT and joining Richmond Ambulance Authority in December 2013, he pursued his Paramedic certification, graduating in July 2014 from Virginia Commonwealth University. He is a second-generation public safety provider. His father is a retired captain with Richmond Police Department, and his brother has over 10 years with that department. His wife and his mother are both Registered Nurses.

Scott was promoted to corporal in 2017, and he also has the distinction of accomplishing the highest number of cardiac arrests resulting in return of spontaneous circulation! He is regularly recognized by his peers and supervisors alike, and he has received many commendations—all of which describe him as being a calm, compassionate, and dependable provider to our patient population.

Scott’s great accomplishments and wide recognition resulted in him being selected by RAA’s Medical Director, Dr. Joseph P. Ornato, to receive the 2017 Operational Medical Director’s Award-Paramedic of the Year.