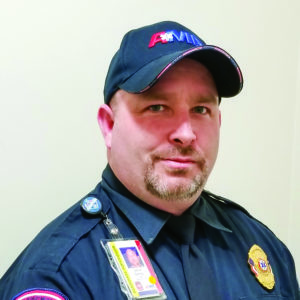 
As Hurricane Harvey worsened, AMR Houston committed to relocate dozens of patients from one hospital to another. Jamie volunteered to serve as AMR’s liaison at the receiving hospital. Over several hours, AMR evacuated 88 patients to safety and Jamie was hailed for beautifully overseeing this operation.

As the storm raged, a hospital asked AMR to return a discharged patient to his home. Two crews tried but were unable to reach the hospital. Jamie decided to give it “one last shot” and enlisted a crew partner. In darkness, heavy rain, and high winds, they made their way through less-flooded back roads to make the transport happen.

Jamie worked day and night, staying positive and frequently checking on the well-being of the crews. Many in the area had lost everything. When Jamie’s leadership told him to go home and rest, he went home but he didn’t rest. Instead, Jamie assembled a cooking team which provided four days of fresh meals to the numerous AMR personnel working in Houston, deployed from several states.

Jamie’s selflessness during Hurricane Harvey shows why he is known for total commitment to his calling.

With typical modesty, Jamie says everything he does is part of a team effort.