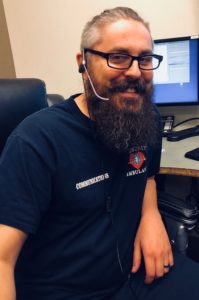 
Joe’s EMS career began in 2005 in New Jersey, where he worked as an EMT. In 2006, Joe moved moved west to Las Vegas, and he received the Star of Life in 2009 while he was working at AMR. In 2011, Joe transitioned into dispatch, and he joined Community Ambulance in 2015.

On October 1st, Joe received the radio call for an active shooter from the Standby crew of the Route 91 Harvest Music Festival. Community Ambulance was contracted to supply medical services to the festival.

Joe and his partner, Lauren Taylor, faced many challenges that night, including not knowing if the Community Ambulance personnel providing standby coverage would go home to their families.

Joe and Lauren worked tirelessly in those moments to bring calm to the chaos and get the needed resources to the incident. Undeniably their focus and hard work helped to save countless lives that night.