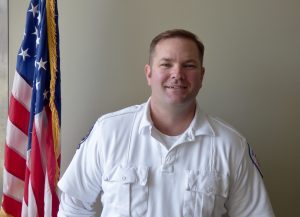 
John Sossei began his service to the public when he served as a non-commissioned officer crew chief for the United States Air Force aboard a C-5 Galaxy military airlift jet. As a crew chief, John developed keen leadership skills and focused dedication to duty and service to his country and others. Upon his honorable transition from the Air Force, John gained an interest in EMS and began exploring a career as Paramedic. He served as an EMT, and then trained as a Paramedic and worked in a high volume urban county-based 911 EMS system in California, where he gained significant ALS field experience.

When John relocated to the East Coast, he began working for Armstrong Ambulance Service, which provides Paramedic services to multiple 911 service areas and entities in the Metro-Boston region. John is highly regarded as a role model to his peers for his work ethic and command presence, as well as for his kind, firm, and honest demeanor. He is refreshingly and respectfully direct, and is highly supportive with orienting staff by delivering honest feedback combined with encouraging support. His ability to successfully educate, support, critique, and develop Paramedics in the field training process reflects his qualities as a gifted leader.

John has quickly advanced throughout his career as a seasoned and astute clinician, peer leader, Field Training Officer, and AHA instructor. His clinical acumen brings a calm, highly-skilled ALS clinician to the scene of the most complex 911 and critical inter-facility patients. His willingness to accept and integrate feedback is a testament to his humility and maturity.

John’s natural leadership as an EMS provider is demonstrated through his passionate and measured advocacy for his patients, his partners, and the Paramedicine profession. John Sossei has the well-earned respect of his peers, as he naturally comports himself as a consummate Paramedic professional.