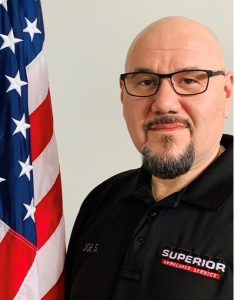 
Jose A. Salas (“Joe”)  began his career in EMS in 1992 as an Emergency Medical Technician. In 1994, he transitioned to EMS dispatch with Advanced Medical Transport, which eventually became AMR of Illinois. In March 1997, Joe began his journey at Superior Air-Ground Ambulance Service of Illinois, Inc., where he worked in the Communications Center as an EMS Dispatcher for seven years. He then transferred to Superior Air-Ground Ambulance Service of Indiana, Inc. and was promoted to Dispatch Supervisor. Joe became the Dispatch Manager in 2020, and is responsible for Superior’s Indiana and Ohio Communications Centers. Joe provides exceptional leadership to Dispatchers, Customer Service Representatives, and On-site Coordinators: all working together as a solid team.

Joe is a certified Emergency Medical Dispatcher (EMD) through the International Academy of Emergency Dispatch. He participates in many of the national EMD conferences, particularly the International Academy of Emergency Dispatch (IAED) Navigator, to keep current and knowledgeable on key changes and critical information regarding EMD. He has helped implement and train dispatchers in system status management, which is still in use to this day.

Recently, Superior Ambulance of Indiana relocated its dispatch center into a new state-of-the-art facility. Not only was the move inherently difficult, but we had to close one dispatch center and reopen another, all while still providing exceptional customer service to our 911 communities and hospital systems. Joe was instrumental in ensuring this seamless transition.

In 2020, the Superior Ambulance of Ohio was created. The biggest challenge was taking two completely different companies (Columbus Connection and CEMS), which had their own cultures and identities, and remolding them into a new Superior culture. Time, patience, and communication were essential to accomplish this monumental task while continuing to provide exceptional customer service to the 911 community and hospital systems we serve.

Joe is a servant leader who purposefully uses active listening to make sure that collaboration is achieved. His personal mission statement is “Coming together is the beginning; Keeping together is the progress; Working together is the success.” Joe’s colleagues describe him as driven and passionate about his job and his personnel, and assert that “he spends a lot of time developing individuals in the dispatch center.” Joe aspires to lead both his teams through the ACE accreditation. His goal for his employees is to give them the tools they need for success in both their personal and professional lives.

In his free time, Joe enjoys spending time with family and friends. He is a proud father of three. His oldest daughter is involved in social work and his other daughter is in her last year of nursing school. His son is still deciding which college to attend. Joe is also proud of his Native American heritage. His father was a Lakota Sioux Chief. Joe is active in the Native American Nation and frequently attends events in the community. He also volunteers at the National Gathering of American Indian Veterans’ annual event at Cantigny Park in Wheaton, Illinois. It is an event held over three days that honors veterans and military personnel of all cultures, eras, and branches in the Native American style.