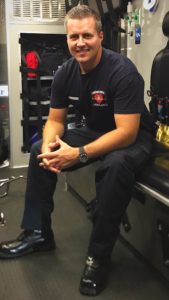 In 2016, Julian returned to Las Vegas and joined Community Ambulance.

Community Ambulance was the company contracted to provide medical services at the Route 91 Harvest Music Festival, and after the October 1st attack last year, Julian and his partner, Edgar Bibiano, were dispatched to get the injured to the hospital.

Julian and Edgar were one of the first units to arrive outside the venue’s main medical tent, and without hesitation, they began making room for as many patients as they could.

They returned to the incident two more times to transport additional patients.

Julian’s determination and bravery helped to save countless lives that night.

In his free time, Julian enjoys aviation and travel, along with watching various sports, including hockey, baseball, and football.