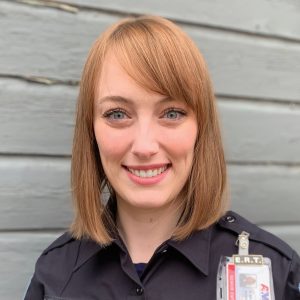 
Katherine Miller’s positive impact on her team rivals that of EMS professionals with decades of experience. Since joining AMR’s operation in Syracuse in August 2017, Kate has earned widespread respect from her peers and supervisors. During her short tenure, Kate has sought out additional training, demonstrated strong team management skills, and attained the ranks of Field Training Officer and senior EMT.

Kate is active in her community. She leads Stop the Bleed courses and has completed Rescue Task Force Active Shooting training to improve her knowledge and skill. Kate was quick to join AMR’s Emergency Response Team and was deployed after Hurricane Michael struck the Florida panhandle last October.

New and experienced providers alike seek out Kate as a partner due to her abilities and genuine positive attitude. Though still new to EMS, Kate is a role model and someone to watch as her career unfolds.