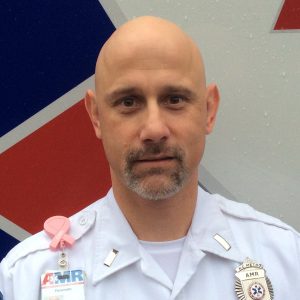 
After working as an electrician and serving as an expeditionary warfare and submarine specialist in the U.S. Navy, Kenny Denk found his calling in the EMS field. He joined AMR in April 2012 after earning his Paramedic certification. Kenny is a skilled clinician who takes great pride in his work. His supervisors often receive compliments about the dignity and respect he shows to patients and colleagues.

Kenny has a heart for community service. He leads his operation’s annual CPR challenge and has organized efforts to honor veterans in his local community. When a need arises, Kenny is not shy about sliding back into electrician mode to help with remodeling and other tasks around the station. Kenny also serves as an assistant Scoutmaster for a Boy Scout troop and a medical representative for an American Heritage Girls troop. Additionally, he has helped lead marriage retreats and is a Eucharistic Minister at his church.

Kenny is most proud of his ability to treat critical care patients. He is currently working to obtain his critical care certification.