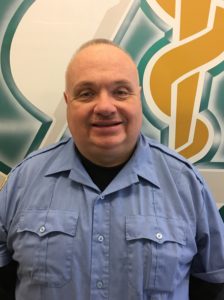 
Kenneth “Ken” began serving his community through EMS in 1989 as an EMT and Firefighter, but quickly accelerated to an Advanced EMT that same year. In 1993, Ken expanded his knowledge once again and became a Paramedic. Shortly after becoming a Paramedic, Ken became an instructor with the American Heart Association. In 2001, Ken became an instructor with the National Rifle Association with the intent to educate youth in accident prevention. To further serve his community, Ken joined the Ohio Military Reserves, and also became a special topics Instructor for the Ohio Peace Officer Training Commission. Continually furthering his education, Ken has since become a CICP-Paramedic. Ken strives for excellence in each patient interaction; ensuring their clinical needs as well as emotional needs are cared for to the best of his ability. Education is one the most important jobs Ken does, whether it is educating patients to alleviate fears on what will happen next in their care, mentoring new or less experienced EMT’s and Paramedics, or training for the American Heart Association.

Ken also serves as the President of the IAEP local 252 collaborating with fellow coworkers and the management team at Community Care Ambulance, and is an active member of the Safety/Wellness Committee.

Ken cares deeply about the communities he serves and has a solid rapport with the facilities in the area. Ken ensures his patients are not only cared for clinically, but emotionally as well as he attempts to ease their fears. Last year, Ken stepped up to play the important role of Santa at the Children’s Christmas Party which was a huge success. Ken is dedicated, caring and compassionate in his work.