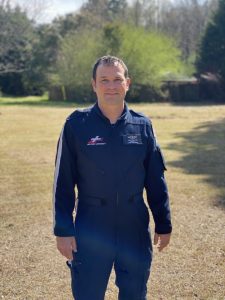 
Lance Blythe is being honored as a Star of Life for providing critical care to a four-year-old gunshot victim while also guiding a new nurse during the transport.  The toddler had been shot in the abdomen and had lost a lot of blood. Lance not only performed his duties with calm and precision but also provided leadership and guidance to the nurse, who, along with Lance, had to effectively manage an entire supply of blood and plasma. Once the hospital was selected, Lance instructed the pilot to communicate with the OCC (Operational Control Center) and CENCOM that a surgical team needed to be prepped for the incoming patient. Then, to add another layer of complication, the flight hit a few patches of turbulence caused by extreme winds. Through it all, Lance remained composed, fulfilling his duties and helping others at the same time.

In the end, the transport was a success. Lance’s direction saved the life of a little boy. Lance is a humble hero whose skill, talent, and experience represent the best of EMS.