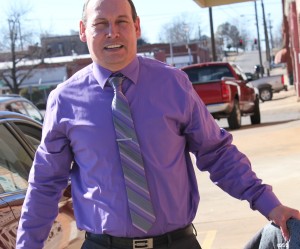 Larry Pickens currently serves as Creek County Emergency Ambulance Service District’s Special Projects Manager. He was hired by Creek County in 2001 as an EMT-B. Larry served as a street basic until becoming a supervisor in 2006. In 2008, Larry became part of the office staff, serving as a “go to guy” for computer problems. Larry has kept the company current with the Oklahoma Emergency Medical Service Information System (OKEMSIS), has filled in for Creek County’s billing department when someone is on vacation or sick, and has kept the service’s technical programs running during severe weather or disaster events, as well as during many upgrades. Larry has frequently been called off duty to address issues with the company’s servers, and has responded without complaint, even at 3:00 AM. As a result, his file is always full of positive comments from other medics and patients.

In 2013, Creek County Emergency Ambulance Service District was exploring ways to be more involved within the communities it serves. As Larry was already a car seat technician, he developed Creek County’s only child safety seat program. In addition, Larry has been appointed to ten different committees that involve supporting and improving the health and wellness of the community. He currently serves on the Creek County Partnership Committee, the Creek County Healthy Living Program, the Substance Abuse and Prevention Committee, the Blue Ribbon Dash (a child abuse prevention committee), the Community Baby Shower (which supports young impoverished mothers), the TSET Committee (which supports smoking cessation), and the Sooner Success Committee, which promotes healthy living. Larry also serves on the Creek County Literacy program board.

In just two years, Larry has become the face of Creek County Ambulance in the community. It is therefore our pleasure to recognize him as a Star for 2016.