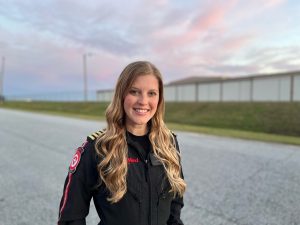 Lauren Van Damme is being recognized for her commitment to her base, and for her public relations efforts during COVID deployments. Lauren began her career as a secretary with EagleMed in Kansas before working her way through the ranks to become a frontline pilot in King Air 200s. In October 2021, a pilot was injured in an off-duty accident. Along with the other pilots at the base, Lauren worked a ten days-on-five-days-off rotation to ensure that the base stayed in service and that the patients and customers were served. Her concern for her patients’ care is mirrored by her concern for her teammates’ welfare.

Similarly, in August 2021, another of her coworkers, a Flight Paramedic, was injured in a rock-climbing accident that left him immobile for a short period of time. Lauren took it upon herself to cook several crockpot meals, freeze them, drive them more than four hours away to his home, and show him and his wife how to warm them up for quick meals.