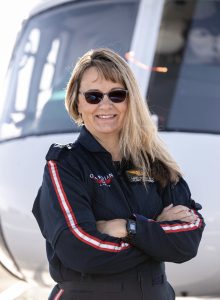 
Lauri Wempen is being honored as a Star of Life for her leadership and service to her community and to clinicians throughout her state. Lauri has been with Guardian Flight Wyoming for the past six years and has been working in EMS in communities throughout Wyoming for the past thirty-five years. Among her many achievements, Lauri served as the EMS Director for Fremont County EMS from 1998-2013. During this time, she instructed new EMTs and helped to build the EMS personnel in Wyoming, many of whom are still working the front lines today. She also continued to take ambulance calls to support her staff and community. Additionally, Lauri was an appointed member of the Wyoming Governor’s Board for Public Safety and Communication from 2007–2013, and she represented Wyoming in 2010 during EMS on The Hill in Washington, D.C.