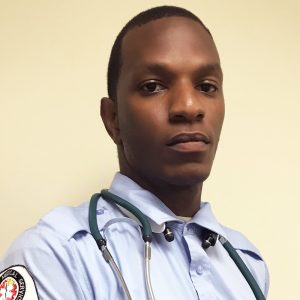 
Mentor, caregiver, and change agent are all words used to describe Lynford Lewis.

As a teacher, Lynford helps new team members acclimate to the EMS profession. He is respected by his peers for the way he approaches his job, cares for patients, and advocates for his team. Lynford demonstrates a positive attitude and solution-focused mindset. A champion for change, Lynford is involved in several organizational improvement initiatives.

Last September, when severe flooding impacted his island nation, Lynford volunteered to serve in an EMT role as part of the Trinidad and Tobago Red Cross response effort. During a different flooding incident last year, Lynford was dispatched to a marooned area. His ambulance was unable to reach the patient, but Lynford found and boarded a truck that was able to take him and his equipment to the patient’s side.

Lynford’s dedication to serving patients and the EMS industry are commendable.