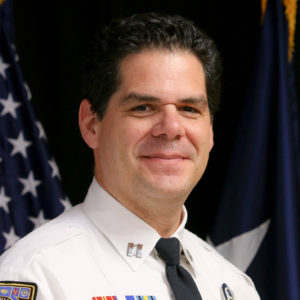 
In January of 2000, Marco Villasenor moved from El Paso, TX to join Austin-Travis County EMS (ATCEMS). Marco moved up the ranks and became a Field Training Officer and then Captain. For the last 7 years he has been a Designated Medical Officer (DMO) under the Clinical Performance Improvement group.

As a DMO, one of Marco’s key rolls is to evaluate the performance and provide CPR performance feedback for every cardiac arrest patient treated by ATCEMS. As a result of his work, Marco was awarded the Medical Directors Award in 2014, and he received a travel scholarship to the American Heart Association’s Resuscitation Science Symposium in Chicago of the same year. Through “Pit Crew” training and CPR Performance feedback, ATCEMS experienced significant improvement in compression fractions and resuscitation rates. Marco’s contributions in this initiative were instrumental in these improved performance measures. Today the DMO’s are part of the response matrix and are dispatched on high priority calls when they are closer.