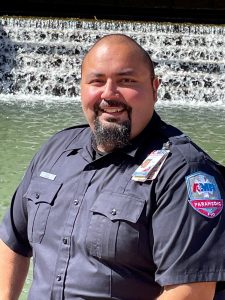 Mario Vialpando is being honored for exhibiting exceptional patient care during several critical, high-profile calls. Mario is described as a “team player” who always goes the extra mile in his duties, and is praised for his skill and his willingness to offer extra help when the situation calls for it.

In one incident, Mario saved a twenty-two-year-old man who had suffered a self-inflicted gunshot wound to his lower right jaw. The young man, who was bleeding profusely, was on the roof of an apartment building and was in excruciating pain. Through Mario’s medical expertise and serene composure, the man was safely extricated and transported to a facility where he received further life-saving care. This is just one example of the passion and command of knowledge that drives Mario to do his job so well.

Likewise, Mario cares for the well-being of his coworkers just as he cares for his patients. Mario is a staunch supporter of his colleagues’ mental health. He openly gives out his phone number to coworkers, encouraging them to call him if they want to talk or have something heavy on their minds.

Mario also mentors new EMTs and Medics, while fostering a healthy and safe learning environment for them. He is known for always being kind and courteous to everyone he meets.