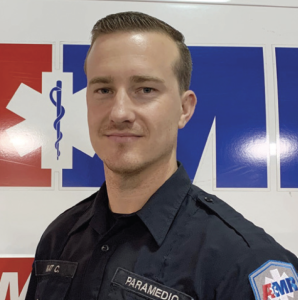 
Mathew Cox is being honored as a Star of Life for his off-duty actions that saved a boy from drowning. In January last year, Mathew was enjoying a vacation in Hawaii. While relaxing on the beach, he noticed a young boy splashing in shallow water near rocks. In what seemed mere minutes, the strength of the waves increased significantly, crashing violently on the sandy shore. Mathew looked for the boy and noticed he was being pushed by the waves into the sharp rocks. A moment later, the boy was pulled under by the strong current below. Mathew ran into the water. He caught a brief glimpse of the boy and dove in. Fighting the current himself, he reached the boy and pulled him back to the shore and his waiting parents. Mathew’s coworkers would not be surprised by his actions that day. They know he lives by the belief that you should leave a person or a place a little better than you found it.

Mathew began his career with AMR as an EMT in 2014 at a mere 18 years old. He quickly enrolled in paramedic school and earned that title. He continues to embrace educational opportunities, seeking out senior paramedics for tips and feedback. He strives for the best care for each patient he encounters.