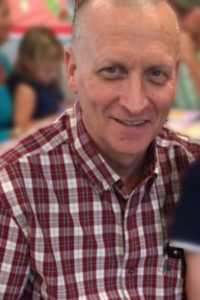 
Michael Collums was doing the work that he loved and had done with excellence when he was killed in the line of duty on February 21, 2017. An EMT with more than 20 years of service, Mike was responding to an emergency patient when his ambulance collided with another vehicle. Mike was 54 years old.

Mike’s greatest passions were his sons, grandsons, and protecting the community as an EMT. Mike’s co-workers valued his reliability, attention to detail, and good humor. Mike was meticulous in all he did and he held others to that same high standard. Mike’s pride in his work showed in the crisp uniform he always wore.

As with many of us, Mike had a second occupation. Mike was also the safety coordinator and part of the office staff at a welding company.

Mike encouraged his wife, Gwen, to become an EMT. Gwen is now in her 12th year of service.

Mike left a legacy as a model EMT, devoted public guardian and beloved husband, father, grandfather, friend, and co-worker. A most humble man, Mike would have said, “I was just doing my job.”