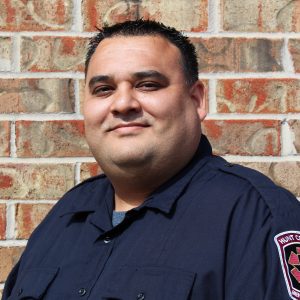 
If there were a “Mr. Greenville, Texas” contest, Michael Sanchez would be an odds-on favorite to win it.

Last year, Michael’s coworkers and local first responders picked him as Hunt County Fire Association’s EMT of the Year. He has received this honor and mentorship award several times during his 17 years at AMR-Hunt County EMS. Michael consistency puts others’s needs first, and he helps to organize employee and community-wide EMS Week activities and first responder recognition ceremonies each year.

Michael and his partner were returning to the station last winter when Michael noticed a small boy walking in the rain on the side of the road. Something did not feel right, so Michael and his partner stopped to check things out. The boy had wandered off from school. He did not know where he was and could not remember his last name. Michael’s partner contacted law enforcement while Michael got the boy warmed up and gave him snacks. He was reunited with his grandmother soon, but the story does not end there. Michael noticed there was no booster seat in the car for the boy, who was still too small to ride safely without one, so he arranged for the family to receive one.