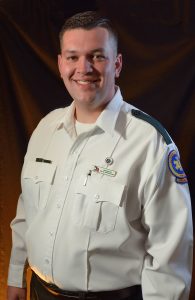 
Acadian Ambulance Paramedic Michael D. Richard originally joined the company in 2008 as an EMT. Mike later advanced to the Paramedic level. After spending a few years pursuing other career opportunities, Mike came back to Acadian in 2015. In 2017, Mike became a Critical Care Transport Paramedic working in Lake Charles, Louisiana, and in 2018, he was promoted to a Paramedic Field Supervisor position. While in Lake Charles, Mike was ambulance partners with EMT Tyler Weaver.

Currently, Mike operates a Rural Responder Sprint Truck in Acadia Parish, Louisiana, and handles some of the area’s governmental relations. Mike also serves as a preceptor and mentor for new hires.

Acadian Operations Manager John DuBose says, “Not only is Mike good at his job, but he makes others around him want to do better. He leads by example and challenges employees to always do the right thing.”

Mike played bass in a band for six years when he was younger and says The Beatles and Led Zeppelin are his two favorite bands. Mike is married and has four young sons. In his free time, Mike and his wife enjoy exploring coffee from micro-roasters across the country.