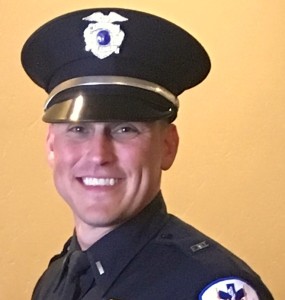 
Richard Allan Buckles, Jr. was born and raised in Visalia, California. At a young age, Richard was introduced to sports, and he has played football and baseball his entire life. Richard attended local schools and excelled at playing baseball while in high school. He met his wife, Erin, while in middle school and got married in June of 2002. To support his wife, Richard aspired to do something in public safety. As a first step, he went to an EMT class at a local college, and in 2003, he started working as an EMT. Richard also spent a short time as a volunteer firefighter with the Tulare County

Richard started with American Ambulance in 2005. Since then, Richard has continued to excel. He has been involved in various programs within the company, and has taken on restocking, ordering, and even leading the process for the annual California Highway Patrol inspection.

He has also reached out this year to help with one of American Ambulance’s initiatives for senior citizens, Heart of Seniors, a program to promote cardiac health in women. Earlier this year, Richard and several paramedics from American Ambulance even served as volunteer “escorts” for the ladies attending the event at the local senior center. This program is growing and becoming more popular every year in the senior community.

Richard and Erin have two boys who are very active in sports. Richard spends his off-time coaching his sons’ All- Valley Youth Football and Cal Ripken Baseball teams.