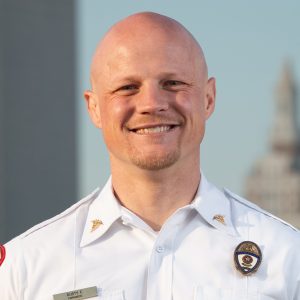 
Service has been the common thread running through Rusty Friske’s professional life. Rusty joined the EMSA team in August 2014, shortly after receiving his EMT certification. He had intended to join the fire service, but fell in love with medicine. Rusty earned his Paramedic certification in August 2016 and has since become a part-time Clinical Coordinator. He is responsible for leading the EMSA Field Training Officer program, and has taken responsibility for helping EMTs successfully transition to Paramedic roles. Rusty has received numerous kudos for excellent patient care and customer service during his time at EMSA.

Before entering the EMS field, Rusty worked as a youth pastor and then as a YMCA Director. Doing for others – patients, colleagues, parishioners, campers, and strangers – fulfills Rusty, and he and his wife encourage their young daughters to possess servants’s hearts as well. The family has adopted the values of faith, respect, integrity, sacrifice, kindness, and excellence (an acronym of “Friske”) and discuss how to align their lives with these values daily.