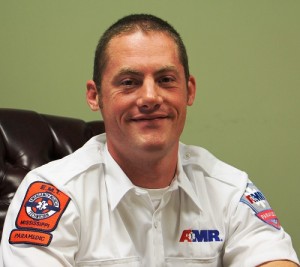 
In January 2015, a pickup truck flipped several times directly in front of Ryan and his partners’ ambulance. On approaching the vehicle, they saw the engine was smoking. The doors wouldn’t open. While Ryan’s partner pulled the driver through the window, Ryan yanked and kicked the passenger-side door wide enough to free the two other occupants. Moments later, the truck burst into flames. Coincidentally, the TV news crew was right behind the ambulance when the crash happened. The TV crew filmed the rescue and the video went viral on social media sites – showing these heroic
actions to a worldwide audience.

But this triple save isn’t the only reason Ryan is a Star of Life. He is one of the best field training officers at his operation. He and his partner placed second in AMR’s southern regional competition on clinical and safety skills, plus the Mississippi EMT Association named Ryan the statewide 2015 Paramedic of the Year. For his FTO talents, superior patient care and leadership ability, he was promoted to clinical manager late last year.

Ryan and his wife, an emergency nurse, stay busy with their five children. AMR Mississippi is proud to nominate Ryan Wilson as an American Ambulance Association 2016 Star of Life.