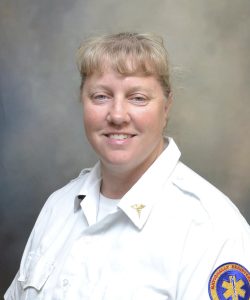 
Mayo Clinic Ambulance is honored to be represented by Shelly Ziegler, Paramedic, as a Star of Life.

Shelly began her career with Mayo Clinic in 2008, initially as a Paramedic at Mayo Clinic Ambulance in Fairmont, MN, and now works in Mankato, MN. Shelly’s patient care skills and commitment are evident to all who work with her. She is also known for her compassion and ability to communicate with patients of all ages as well as their family members.

“Shelly is the consummate teammate who selflessly helps out not just with the Mankato team but with our other operations as well,” says Paul Drucker, Senior Director of Mayo Clinic Ambulance. In a nomination submission, one of Shelly’s colleagues notes a time when Shelly went above and beyond the call of duty to provide for the physical needs of the family of a patient on what was certainly their worst day. Shelly helped the family without seeking any acknowledgement and with her own funds, though not for the first or only time. Shelly’s colleague also remarked that Shelly is an admirable example of how to serve every day.

When asked to give her advice to new Paramedics and EMTs entering the field of EMS, Shelly explained, “Always be willing to help others and be there for coworkers. We have a special career, and we see and deal with a lot of things most people would never dream of doing. Sometimes we are the only ones that understand how each other feels. Be sensitive to that and always take care of your work family!”

Shelly is originally from Vernon Center, MN and received her Paramedic education at South Central College in Mankato, MN.