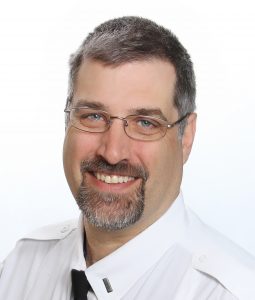 
Steve LaDue has skillfully provided mobile healthcare in his community for many years. He was previously a provider at Rural/Metro and Greece Ambulance, then joined Henrietta Ambulance (CHS Mobile Integrated Healthcare) in March of 2006. He has served in many capacities at Henrietta Ambulance, always as a first class provider.

Steve has a passion for being a Paramedic and for educating EMS personnel. His extensive experience gives him the ability to recognize when patients are truly sick and treat them accordingly. For example, when Steve and his partner were sent to a priority 4 illness call, and upon arrival, Steve immediately recognized the patient was having a STEMI even though the patient’s symptoms were vague. Steve initiated appropriate care and provided rapid transport to a percutaneous coronary intervention (PCI) center with a scene time of 8 minutes. This recognition of the critical illness certainly made a difference in the patient’s life.

Steve was one of the first Rapid Sequence Induction (RSI) Technicians in the region, and the first to perform an RSI without the assistance of a second Paramedic. He is confident and able to perform complex skills independently in order to best treat his patients. He has always challenged processes to ensure any changes were being implemented for the right reasons, though he remains flexible enough to modify his practice based on new evidence.

Steve comes from an EMS family, as his wife is also a Paramedic at an agency within the region. Steve is a skilled scuba diver, and at one point in his career he dove professionally, inspecting bridge pylons in lakes and rivers. Today, Steve enjoys scuba diving for recreation when he is not camping with his family or making beer in his basement.