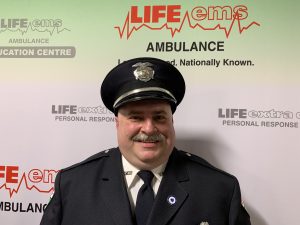 
Tim Dickinson earned his Paramedic license from Montcalm Community College in 1996. He started out working as an EMT and Paramedic for Newaygo County/Gerber Ambulance, and also served as a firefighter in the county for several years.

In February of 2000, Life EMS took over EMS operations in Newaygo County, and Tim began working as a part-time EMT and Paramedic, while working full-time at the Sappi paper plant in Muskegon. Tim began full-time work for Life EMS in 2011 after the paper mill closed. Currently, Tim serves as a Paramedic Field Supervisor in the Newaygo County operation; a position he has held since 2015. Tim lives in the Fremont area with his wife, Louise, and they have three grown children and four grandchildren.

Tim has earned the respect of his coworkers who nominated him as a Star of Life. He demonstrates a lead-by-example approach in his commitment to the associates, patients, and facilities he serves. Tim works tirelessly to make sure the schedule is fully staffed and often fills shifts himself, even at other operations. One nomination wrote, “Tim is highly organized and takes care of issues in a timely manner, which is noticed by associates and keeps morale on the right side of the scale. I cannot think of a better choice to represent Life EMS than Tim Dickinson.” Life EMS Ambulance is proud to recognize Tim Dickinson as its 2019 Star of Life.