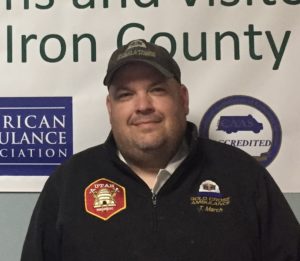 
Ty has been in the EMS industry since he earned his certification in 2001, and he has worked with Gold Cross Ambulance for three years.

Ty was selected as a 2018 Star of Life because of his selfless service to the citizens of his community. He has always demonstrated top-notch clinical skills, but on December 25, 2017, however, they were truly put to the test.

While Ty and his partner were returning to the county from a long-distance transport, they heard the call go out for a 13-year-old cold-water drowning victim. They had just driven by the scene and quickly turned around. The victim was found after he had been underwater for 30 minutes. Ty assisted in bringing the boy out of the water then staring CPR and quickly resuscitating him. The boy has fully recovered, thanks to the skilled response and determination of his rescuers.

When he’s not providing excellent pre-hospital care to the people of Iron County, Utah, Ty enjoys spending time with his wife, Holly, and their four kids, two of whom he adopted from an abusive situation that he had responded to as the Paramedic. He also enjoys woodworking and going camping.