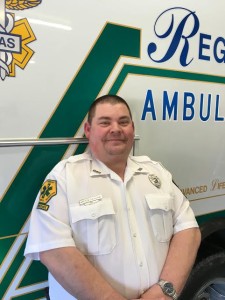 
Walter is being honored as an American Ambulance Association Star of Life for his commitment to his community and to his fellow first responders. Serving as volunteer Field Chief for the Regional Ambulance Castleton First Responders, he manages the team by coordinating scheduling, completing paperwork, and ordering and maintaining supplies, equipment, and uniforms, in addition to responding to calls. Walter has served on the RAS Castleton First Responders since its creation in 1992. Walter is also an AEMT at Regional Ambulance, serving since 1999.

Walter is an instructor for EMT and EMR courses, and he works to train the Castleton police officers to be first responders. Over the past twenty-four years he has consistently demonstrated a devotion to others, serving the public as an Emergency Medical Technician and exemplifying the Regional Ambulance Service motto of “Serving People First with Pride, Proficiency and Professionalism.”