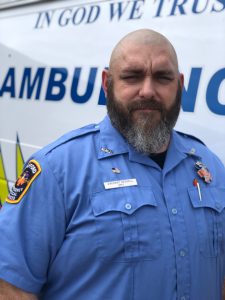 
Zachary Reddell began his career in EMS during the spring of 1999 as a First Responder and Volunteer Firefighter for the communities of Pottsville and Crow Mountain in Pope County, Arkansas. He had a passion for helping others and was able to successfully obtain his EMT license in 2005. At the start of his career, Zachary effectively owned and operated his own business while also working as a part-time employee for Pope County EMS. He quickly found that providing mobile healthcare was his passion and decided to transition into a full-time EMT position in 2007 and serve the county where he lived.

Zachary is always going above and beyond in his service to the Johnson County community. Pafford EMS has received many compliments and praises regarding Zachary from patients and patients’ families, and also received recognition for Zachary’s work during his FEMA deployment for Hurricane Michael. Zachary is a great member of our Pafford Clarksville family and regularly goes the extra mile on daily duties and helping other crew members.

Zachary has been instrumental in team building exercises, public relations, and many charitable events in the region; though he feels like he has many years of service still left to make his mark in the EMS field.

Zachary Reddell has been happily married to Lindsey for 18 years. They share two children, Logan (17) and Cole (14). The Reddell family is involved in multiple sports and civic groups.