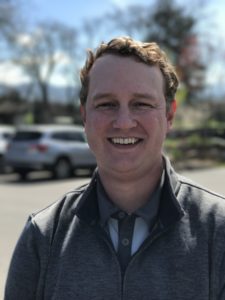 
Aaron Pawol has been a 911 ground Paramedic at Mercy Flights since January of 2009. During this time, Aaron has built strong relationships with his community, peers, supervisors, and patients.

Since joining our staff, Aaron has excelled in training Paramedic interns in his role as a Field Training Officer. Aaron welcomes new employees into an environment that promotes learning and accountability. Aaron is also perceived as a mentor by his peers.

In his off time, Aaron teaches at the local Community College Paramedic Program as a Lab Instructor. Aaron is also an avid soccer and golf enthusiast.

On February 25, 2017, while off-duty and playing in a local golf tournament, Aaron noticed some commotion on the green at the next hole. Aaron heard sirens in the distance, and drove his cart up to the scene to investigate. Aaron saw that there was active CPR being performed on an individual, so he identified himself as an off-duty Paramedic and began to assist. Due to the relationship Aaron has built with local fire personnel, they asked him to stay to “run” the call, even after the arrival of the fire/rescue unit and ambulance. Aaron continued to take the lead on the cardiac arrest patient and when return of spontaneous circulation (ROSC) was attained, the ambulance crew proceeded to transport the patient.

Aaron later received some follow up information from the transporting ambulance crew that the patient received intervention in the Cath Lab at a local hospital, and had survived the incident. Aaron thought that the story ended there.

Several days later, Aaron was surprised (to say the least) when the patient called his personal cell phone to say “thank you”. The patient had contacted the golf course’s pro shop and eventually tracked down Aaron to express his gratitude.

Although usually composed, the night Aaron received the phone call from the patient, he was visibly emotional. Aaron received recognition that was well deserved.

Aaron is truly an advocate for patients and his community. Aaron is completely selfless and commits himself to his profession and to helping others. Aaron is a leader, a mentor, and a true asset to Mercy Flights.