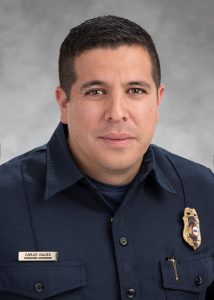 Carlos Valdez Acosta-Meza is being honored for his dedication to his coworkers and to his patient care.

Throughout 2021, Carlos worked at least eighty-two extra shifts, the majority of which were on busy ALS ambulances in the 911 system. In addition, Carlos is commended for consistently volunteering to help when staffing is short, in both his home operation and in surrounding areas. He would sometimes drive up to two hours, one way, to make sure other operations had what they needed. Carlos is also known for being an advocate for his team, working non-stop to ensure they have the best support possible when dealing with low staffing and high response volume.

In addition to caring for his colleagues, Carlos is an ardent supporter of building up his community. As an EMS professional in the eighth-largest city in the U.S., Carlos happily volunteers in AMR’s community outreach programs.