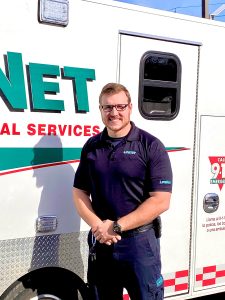 
David “Blake” Norwood has been named a 2022 Star of Life for LifeNet, Inc. in Hot Springs, Arkansas.

Growing up, Blake planned to follow in his dad’s footsteps and work in law enforcement. After graduating from Camden-Harmony Grove High School, he attended Arkansas Tech University, where he earned degrees in sociology and criminal justice.

Shortly thereafter, Blake started his career with the Pope County Sheriff’s Office and then the Camden Police Department. In 2015, Blake earned a specialized degree in law enforcement from the Arkansas Law Enforcement Training Academy.

During his tenure at the Camden Police Department, Blake was dispatched on a call that would ultimately change the trajectory of his career.

“We were having our Christmas party at the police department when I got dispatched on a call for an ‘unknown problem.’ When I got there, a man came running out and said, ‘My friend has been shot.’ I found the victim shot in the leg three times. I took the belt off the man who had directed me to the scene, and I made a tourniquet using it and my collapsible baton. I held it until EMS got there. Helping him felt good, more so than getting a drunk driver off the street, arresting someone for a domestic dispute, or writing a ticket,” Blake said.

Blake received a lifesaving award from the police department for his actions on scene.

When his wife, Amanda, took a teaching job in Hot Springs, Arkansas, Blake felt it was the right time to enroll in the EMT program at the Arkansas Fire Academy. Shortly thereafter, Blake began working for LifeNet. Since then, Blake has served as a Field Training Officer (FTO) for new EMTs at LifeNet.

“I enjoy teaching, especially when you have people who are open and want to learn,” Blake said. “I became an FTO because I wanted to be able to reach more people. My teaching indirectly touches a lot more patients because I’ve taught the other EMTs how to do their job. I always tell my orientees to do the right thing and take responsibility for their actions, and I try to live by those things, too.”

“They are the most cut and dry. You can see the problem and you can fix it. There aren’t a lot of questions to be asked,” he said.

Blake was nominated for a Star of Life by his peers and selected by a committee of former Stars of Life at LifeNet, Inc. His integrity, empathy, and commitment to the job and to his patients are just a few of the reasons why Blake’s colleagues admire him. Blake works tirelessly to train new hires and to provide the best patient care possible in every situation.

Blake plans to enroll in Paramedic school in the future and ultimately hopes to work as a SWAT Medic, combining his love for EMS and law enforcement.

When he is not at work, Blake enjoys going out with his friends, playing video games, going to the gym, watching television with his wife, Amanda, and playing with his dog, Scottie, and cats, Matlock and Beldar.