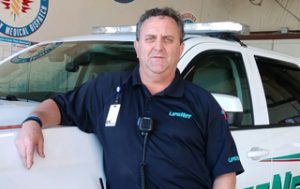 
Dean Rush holds a bachelor’s degree in Marketing and Management from the University of Arkansas. Rush came to mobile healthcare with an impressive track record from his previous career in sales and marketing. When Rush returned to school as a seasoned professional to earn his Paramedic certificate at the the University of Iowa, he started a new chapter in his career that would positively impact multiple communities across the nation.

Rush began his EMS career when he became a volunteer EMT with Humboldt Ambulance Service in 1998, shortly after his family relocated to Humboldt, Iowa. The decision to move was necessitated by his job as a marketing specialist for the textile industry.

Shortly after moving to Humboldt, the local ambulance company asked Rush if he had ever thought about becoming involved in the medical field. They gave Rush a pager and told him to drive to the hospital if it went off. Just 15 minutes after receiving it, the pager went off. There was a snowmobile wreck directly across the street from the hospital involving two 16-year-old kids. That call would inspire Rush to work towards his Paramedic certificate.

In 2001, Rush was named the National Marketing Representative of the year at his full-time job. On the morning of September 11th, his family was getting ready to fly to San Diego to accept the award when they learned all flights had been canceled due to the terrorist tragedy. That events of that day deeply impacted Rush and guided him further towards mobile healthcare.

A few months later, Rush was offered a position working full-time as a Paramedic at Trinity Regional Hospital in Fort Dodge, Iowa. Rush left his corporate career behind to work full-time in an industry where he could truly make a difference in the lives of others.

In 2012, Rush became a flight medic for LifeNet of the Heartlands, a division of AirMethods. Rush also taught as an adjunct professor at Iowa Central Community College in Fort Dodge, Iowa. That same year he received the Hero of the Heartland Award.

When his three children were out of the house, Rush and his wife, Brenda, decided to leave the snow of Iowa behind and head south. Rush became a street Paramedic for the City of New Orleans.

A few years later, the duo—who had met while they were both students at the University of Arkansas—decided to relocate to Arkansas in order to be closer to their children, all of whom had decided to attend their parents’ alma mater. After the move, Rush joined LifeNet EMS in 2016.

A certified Critical Care Paramedic, Rush currently serves as a Field Training Officer and a fill-in Operations Manager for LifeNet’s Hot Springs Division. Additionally, Rush is an instructor in the Paramedic program at National Park College.

His colleagues say, “What best describes Rush is his consistently positive attitude. He is full of knowledge and is eager to share any information when you ask him a question. His work ethic and professionalism are both exceptional and impressive. Rush goes above and beyond the call of duty to help his patients and his co-workers. His patient care is very proficient, and his bedside manner is phenomenal. Rush is deeply committed to imparting knowledge upon the next generation of EMS providers. Rush is an open book, and always takes time to answer questions from colleagues.”