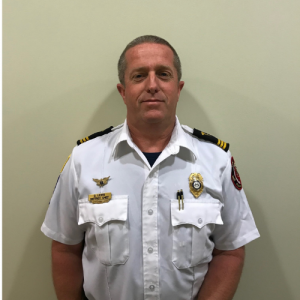 
Chief Doug Lewis began his career in public safety at the age of 17 as a Bryan County volunteer. He received his EMT card in 1982, his Paramedic card in 1986, and became a National Registered Paramedic in 1994. Prior to beginning at Chatham Emergency Services in 2011, Doug worked as a Medic for MedStar Ambulance Service, Effingham County EMS, Wayne County EMS, and Liberty County EMS. In both 1994 and 1996, he was named the Chatham County EMT of the Year. Since 2007, Doug has served as a Tactical Paramedic for the Savannah Police Department. In 2014, Doug was promoted to Captain, and in 2017 he became District Chief.

Chief Lewis has many duties as a District Chief with Chatham Emergency Services. During his shifts, he is constantly running calls, backing up units on bad calls, dealing with customer complaints, and handling various other administrative duties. In addition, he oversees the SWAT Medic Program at Chatham Emergency Services, and has served as a SWAT Medic since 2007. He works closely with the local police departments, providing ongoing training and tactics to make his team as safe as possible.

Doug is one of the most dedicated leaders at Chatham Emergency Services. He is always filling vacant shifts after finishing his regular work schedule, sometimes working over 48 hours straight. Doug is the epitome of EMS excellence and his heart is dedicated to serving others.

Doug and his wife, Valerie, have six children and three grandchildren.